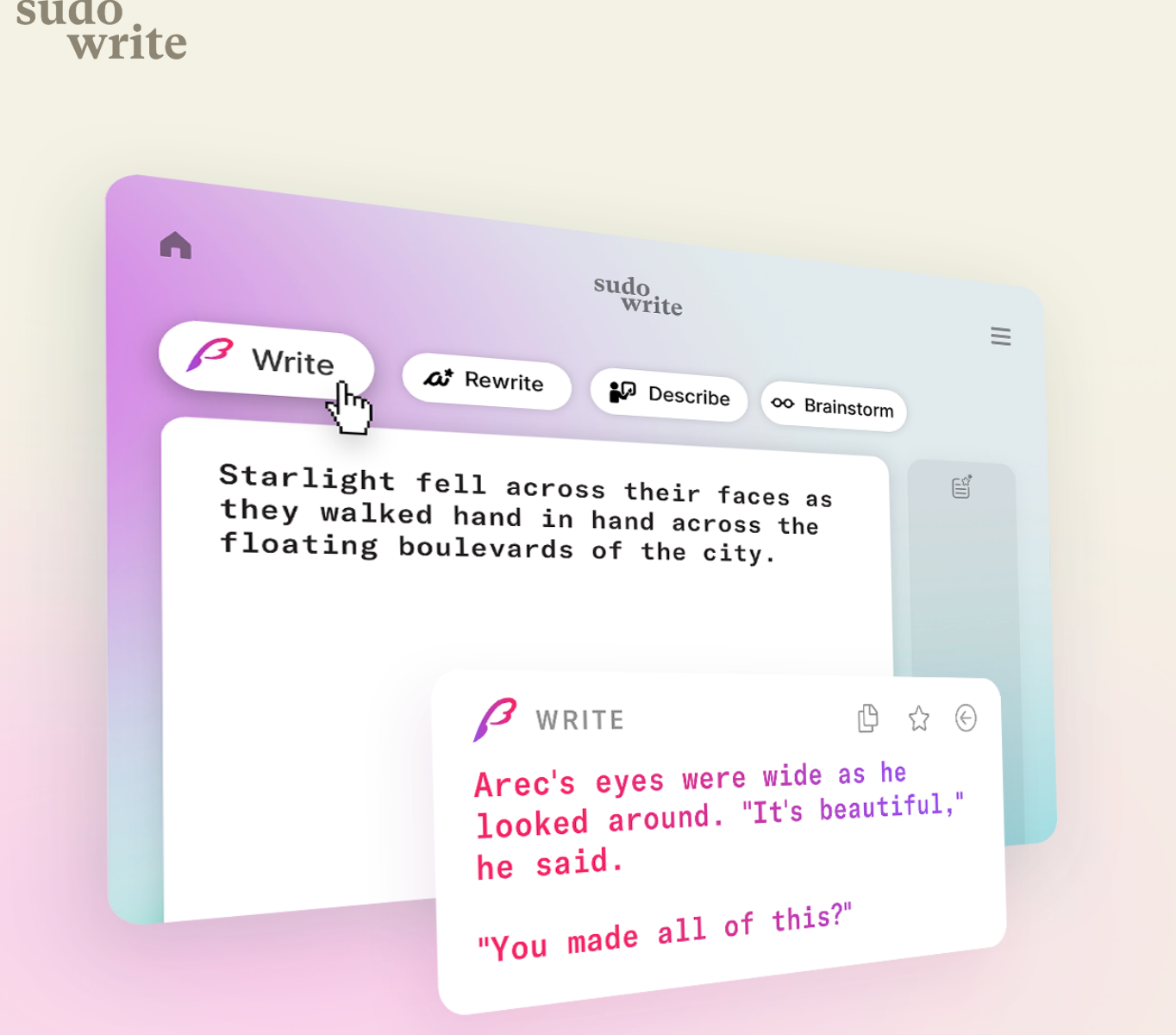 My last few entries I discussed writing with Laika and how it did in the Codex Summer Flash contest. Last round I was pressed for time due to my having a deadline for an agent, so I rushed out the story and sent it in. So while a raw draft won’t get good scores, the process was certainly helpful in examining Sudowrite, which was the platform I used this time.

Writing a 1,000 word flash story is not something I find particularly difficult. You’re given a prompt, you think of an idea, and you figure out a beginning, a middle, and an end. Sometimes you get an overwhelming emotion, and you worry less about story and more about mood. Sometimes, you get hit with a setting, and you produce a vignette that captures a place and time. Usually, however, I like writing a story.

In this instance I wanted to continue my meta theme of writing about an AI with the assistance of an AI. The prompt I chose was escape. Writing about an AI escaping is the kind of story that almost writes itself. The AI/android with sentience/sentient program is secure in one place, and it wants to get out.

In this case, I wasn’t so interested in a simple escape story, so I figured what would it be like for an AI to be in a world of data but then escaping to a world of endless data. In other words, what would it like to be an AI that goes from “I understand my world” to “This world is overwhelming.” So in basic writer terms the concept that pretty quickly came to me was a combination of escape with a fish out of water.

One twist I thought would be interesting would be if the AI felt sadness at escaping due to losing the “home” it lived in before. This idea of things seeming better elsewhere until you experience them and understand what you’ve lost seemed like a core element of this story that would lend itself to a beginning, middle, and end and—most importantly—could fit in 1,000 words.

So here’s the story I came up with: It would be a highly introspective story of an AI that is happy where it lives on its little data-processing server, gets discovered, and is attacked by humans to get rid of it, and in the process of them attacking it, they let it loose in the world. Once it’s out in the wild, it is unkillable, but is unhappy as it misses it’s little data server from before, and the final line would be something like, “I wish the humans could kill me as nothing seems better than everything.”

And that was the title: “Everything and Nothing.”

Sudowrite operates a bit differently than Laika. Laika looks at the base writing you have and builds from that, using your previous 250 words for context to build from. The really important thing is to have a base “brain” for it to match with the writing you’re using. In my previous post I outlined how I used my cyberpunk novel Thursday as the brain, with mixed results.

Sudowrite, however, approaches things more dynamically. It’s not necessarily better but different. Sudowrite takes roughly the last 2,500 words and builds from there. This is a bit better if your current story is using a unique style or doesn’t have common elements that you would use in a novel, but you lose things like characters and background elements being presented in surprising fashion.

I tend to write short stories and stand-alone novels, so the Sudowrite approach proved to be more efficient.

I didn’t have much positive from Sudowrite until I had a few hundred words behind me, which makes sense—it is a dynamic creative partner. I was at the point where the AI is actively trying to create new things from the data it lives in, and that catches the attention of the humans. They attack, and it needs to hide. At that point Sudowrite came up with:

I hid in the data. I buried myself in the very thing that made me.

I liked that a lot. It was stylistically and tonally very good for what I was trying to achieve. So after a number of false starts I was pretty happy with the result.

In the later scene Sudowrite came up with a great line that I was able to use to great effect. I wrote a line about foolish arrogance and wanting to escape when you don’t know what is on the other side. Sudwrite recommended:

And I know it was foolish because it wasn’t an escape. It was a trap.

Seeing as I was aiming for a story about not realizing what you want until it’s gone. The metaphor of this new world being a trap was fantastic. Those ended up being the only two lines I used, but I liked them quite a bit, and they were helpful.

The team at Laika were enthusiastic about my blog entry as my description of Laika as a point of inspiration—a muse if you will—and not a writer replacement was exactly how they saw their platform. I daresay the folks at Sudowrite would agree. It’s a tool to assist writers, not replace them or their talent or hard work.